Music for delight, demonstration and display by an early – Romantic pioneer of the cello.Born in Bergamo in 1822, Carlo Alfredo Piatti was to the cello what Nicolò Paganini was to the violin: a musician who extended the possibilities of his instrument in performance and who inspired countless composers to do the same in writing for it. His remarkable talent was immediately evident, to the extent that by 1843 he was already travelling throughout Europe on concert tours, accompanied by his father. It was Franz Liszt who described him as ‘a Paganini of the Cello’, presenting him with an Amati instrument as a token of his admiration.

Piatti’s concert-tours culminated in a visit to London, where he settled in 1846. In the mid-1800s, musical life in the British capital was full of energy and opportunity. When Verdi learnt that it would be Piatti leading the cellos in the first performances of his new opera, I Masnadieri, he wrote a Prelude consisting of a cello solo with an orchestral accompaniment, which he dedicated to the great cellist. 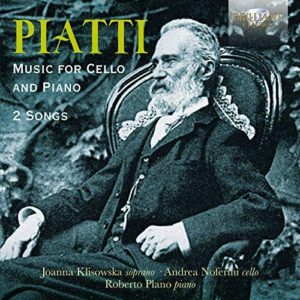 In his own compositions Piatti reconciled virtuoso figurations with a highly lyrical approach to melody which is on show here in two of the songs he wrote for English audiences: O Swallow, Swallow (to a text by Alfred, Lord Tennyson) and La Sera (‘I love the hour of the dying day’), an evening-time, sentimental ballad incorporating a cello solo clearly modelled on the opening of Rossini’s William Tell Overture and astutely calculated to tug at the heartstrings of his well-to-do patrons, who would also want to perform such songs themselves.

However, the bulk of Piatti’s music was designed to show his own skill as a cellist to best advantage. This he triumphantly did with the stupendously virtuosic Capriccio Op.22 on a theme from Pacini’s Niobe. The better-known Capricci Op.25 are not included here; instead, the opportunity has been taken by Andrea Noferini to record some of Piatti’s lesser-known, standalone pieces such as the attractive Op.1 L’abbandono, and Notturno Op.20. Andrea Noferini’s previous recordings include a well-received set of cello duets by Offenbach, released on Brilliant Classics (BC94475).

Alfredo Piatti was the “Paganini of the Cello”, as his admirer Franz Liszt called him, having given him a valuable Amati cello. Piatti was born in 1822 in Bergamo. His talent was soon evident, and he became a famous cellist, traveling all over Europe, meeting influential artists like Mendelssohn, Joachim, Grieg, Clara Schumann and Liszt. In 1846 he settled in London where he was appointed First Cello in Her Majesty’s Theatre and Covent Garden.
Piatti’s cello works are high quality salon pieces, of a great melodic invention and stunning and ground-breaking virtuosity.
Italian cellist Andrea Noferini and pianist Roberto Plano deliver exciting performances of these highly attractive works. Noferini already recorded several successful Brilliant Classics albums with works by Sgambati, Martucci and Offenbach (Duos with Giovanni Sollima). 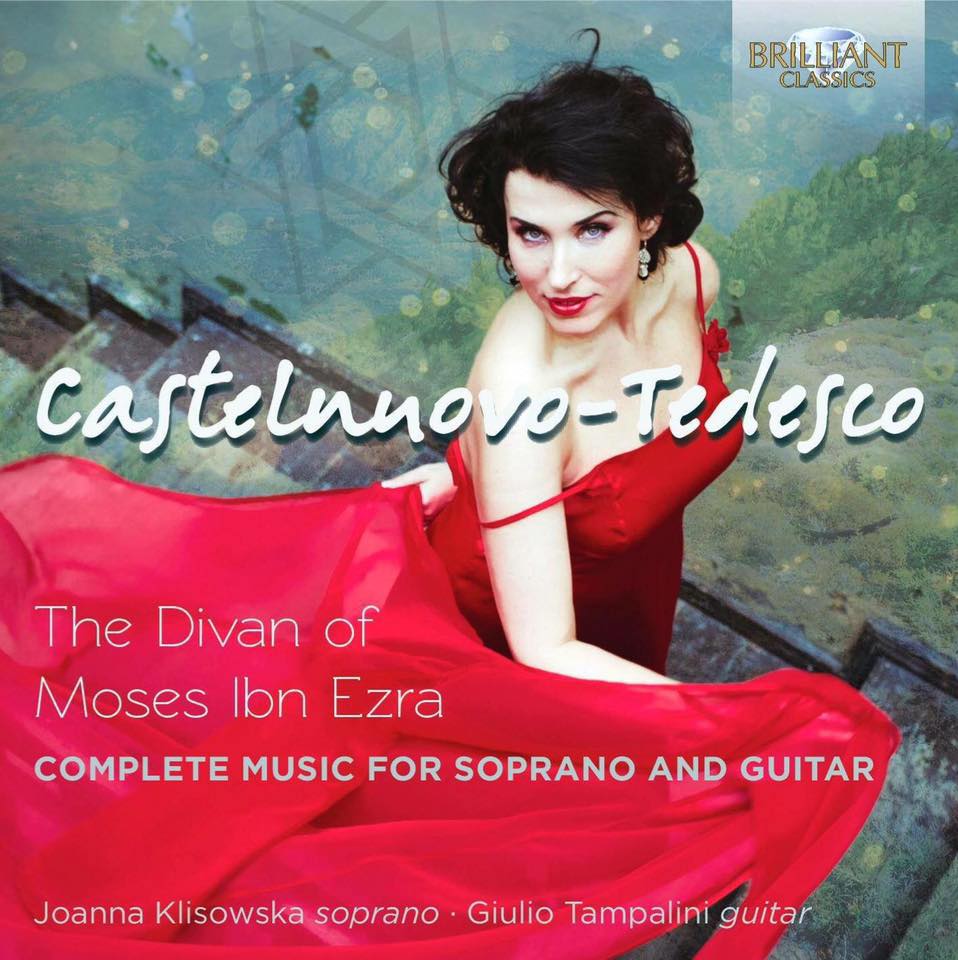 Castelnuovo-Tedesco: The Divan of Moses Ibn Ezra, Complete Music for Voice and Guitar

This is the fourth volume on Brilliant Classics of the vibrantly cosmopolitan music of the Jewish-Italian, US composer Mario Castelnuovo-Tedesco. His heritage is reflected in this substantial song-cycle for soprano and guitar, receiving here only its second modern recording. The Divan of Moses Ibn Ezra is a setting of 19 poems, in a modern English translation, by a medieval Spanish Jew who wrote, like Castelnuovo-Tedesco almost a millennium later, in exile.

Thus the subject of its first section is ‘Songs of Wandering’, before friendship and love turn sour in the second section. Sorrow and defeat also mark the third, ‘Of Wine, and of the Delights of the Sons of Men’ – though still within the composer’s appealingly melodic vein – before the return of spring and a more positive outlook to close the cycle, in which the poet bravely faces ‘The World and its Vicissitudes’ before contemplating mortality with calm resignation in a moving epilogue.
The album is completed with individual songs in Spanish and Italian as well as two settings of Shakespeare. Ranging in date across the composer’s long career, they exhibit his full stylistic range, from the impressionistic, late-Romantic language of the English songs to the more harmonically adventurous terrain of two Spanish folksongs.

Mario Castelnuovo-Tedesco (1895-1968) wrote his song cycle “The Divan of Moses Ibn Ezra” in the last years of his life, a work of reflection on the human condition. Moses Ibn Ezra (1055-1138) was a Jewish poet who took refuge in Spain after the conquest of his land by the Berber Almoravids, an obvious and deep inspiration for the Jew Castelnuovo-Tedesco who experienced the same fate of exile when moving in 1939 to the USA, fleeing the Nazi threat.
The song cycle “Divan of Moses Ibn Ezra” is in English, a translation of the original Hebrew poetry. The work is divided in 5 parts, and describes the stages of human life and its fate: “Songs of Wandering”, “Songs of Friendship”, “Wine and the delights of Sons of Men”, “the World and its Vicissitudes” and “the Transience of the World”. The musical tone is elegiac, sometimes melancholy, a bittersweet reflection on a long life full of glory and despair.
A beautiful interpretation by soprano Joanna Klisowska, specialist in Early Music and 20-th century repertoire, and master guitarist Giulio Tampalini.
The booklet contains excellent liner notes written by the famous composer Angelo Gilardino, in both English and Italian. 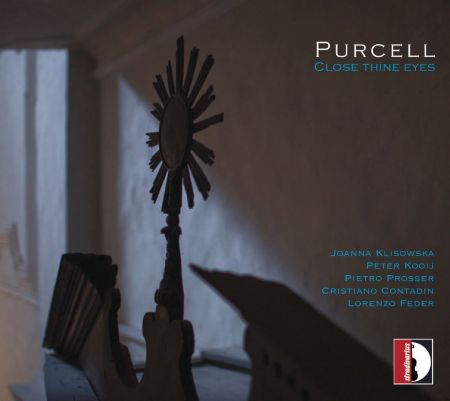 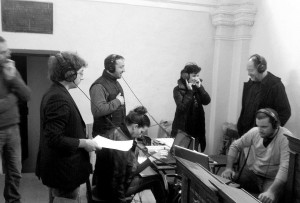 Her performance should be praised not only for purely vocal abilities, but also for creative and highly rhetorical interpretation of the text, as well as very good sense of climate of this music

(…) Joanna Klisowska, an artist living and performing mainly in Italy, sings in three solo pieces (Tell me some pitying angel; Lord, what is a man; Sweeter than Roses) and in the title duet. Her performance should be praised not only for purely vocal abilities, but also for creative and highly rhetorical interpretation of the text, as well as very good sense of climate of this music. Dramatic Gabriel’s summons in the first of solo pieces, initial recitative full of expression, in the second one, sensuous, fleeting arabesques of sounds in the third one confirm a high level of her vocal art and justify the fact of being in such select company”. 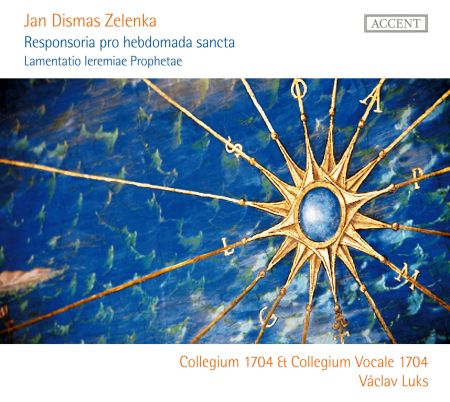 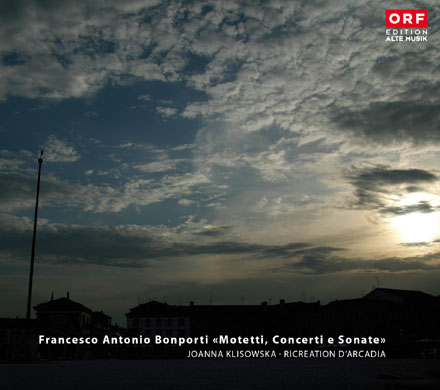 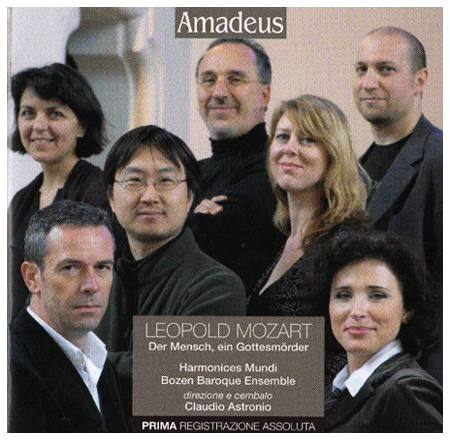 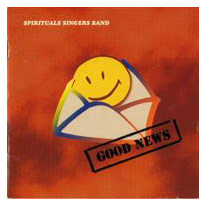